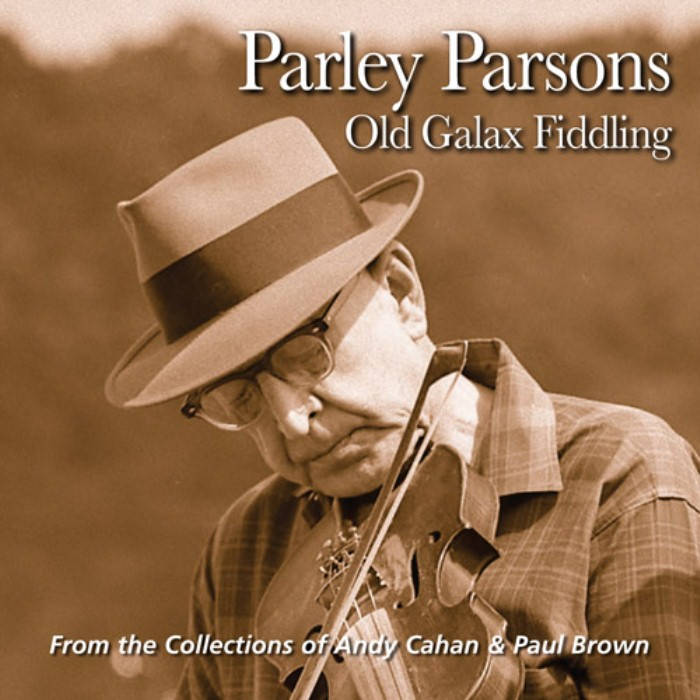 From the Collections of Andy Cahan & Paul Brown

The region surrounding Galax Virginia has long been known for its remarkable musical traditions and the large number of musicians within it. In terms of field and commercial recordings from the 1920s on, the area received perhaps as much attention as any traditional musical Mecca could have. And yet there were local musicians who, while no less talented, somehow went unnoticed, or were simply doing other things with their lives while their neighbors were being recorded. Parley Parsons (b.1902-d.1984) was just such a musician, having only appeared before the 1980s on sporadic recordings of the fiddle and banjo contests at the Galax Fiddler’s Convention.

This CD contains highlights from some of the few recorded sessions in which Parley, already past eighty years old, was the featured musician. A member of the last generation of fiddlers firmly rooted in the local style, Parley’s playing was immediately recognizable as having been influenced by Emmett Lundy (b.1864-d.1953) and Charlie Higgins (b.1878-d.1967), two iconic older Galax fiddlers. Among Parley’s other musical influences were stellar musicians from the nearby North Carolina foothills such as Frank Jenkins, Ben Jarrell, and Fred Cockerham. Parley also played with and learned from musicians who were a bit younger, such as Rafe Brady and Otis Burris, both of the first generation of mountain fiddlers influenced by radio and phonograph. With the exception of the contest numbers at the end, the sessions on this CD took place at Parley’s home, and at the home of his friend Luther Davis (b.1887-d.1986), who can be heard trading opinions with Parley on tune titles and the accuracy of their versions. － Andy Cahan

If you like FRC 705 - Parley Parsons: Old Galax Fiddling (Andy Cahan & Paul Brown collections), you may also like: