FRC 606 - The Plank Road String Band: Recordings from the collection of Al Tharp 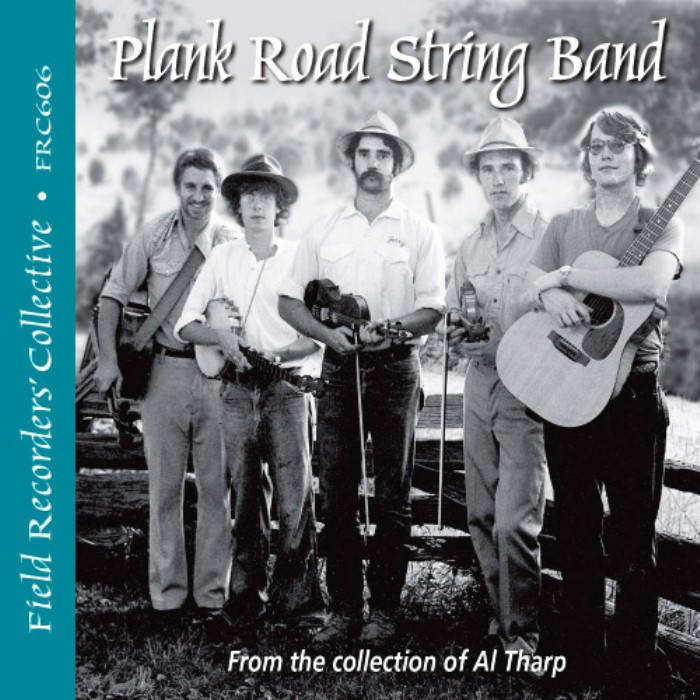 The actual life of Plank Road String Band was brief, but the level of intensity and single mindedness makes those couple of years resonate for me still. The four of us: Andy, Brad, Steve and I had sort of loose alliance with the Green Grass Cloggers in NC. As I recall, we were having a band rehearsal at the chicken farm, seriously discussing the need for a bass player. We’d begun to conceive of ourselves as a dance oriented outfit, and were really desperate for that bottom thump. At which point a strange car began to roll up first through one then the other of the cattle gates up to the house, whence emerged his very self Michael James by god Kott. Having heard of our scene from who knows where, he strode in with his cello and jammed a few. Man, I’m lookin at Brad, Brad’s lookin at Andy, and I’m not sure who’s lookin at Steve. But it was so utterly obvious we’d achieved our weird Socratic ideal of a band; that’s when it became a solid thing. We became a musical entity that night just as the flakiest and most ephemeral of personalities became a kind of sine qua non of our music. – Al Tharp

Steve Gendron, guitarist for the original Plank Road string band, had passed away and his friends in Denmark proposed a tour for the remnants of Plank Road. Andy and Brad had moved on to other things. Michael James Kott and Al Tharp brought in fiddler James Leva to form a trio that would perform six week tours throughout Northern Europe during the summers of 1979, 1980, and 1981. The Europeans didn’t know quite what to make of a trio that sang in three part harmonies using fiddle, clawhammer & tenor banjo with Michael’s cello worn guitar-style around his neck and shoulder. This 1980 recording (tracks 15-24), made live in a Danish living room on a two-track reel-to-reel machine, gives an idea of the band’s innovative approach to the traditional music they’d been playing in Virginia over the previous decade. – James Leva

If you like FRC 606 - The Plank Road String Band: Recordings from the collection of Al Tharp, you may also like: